Borinquen Gallo: Like a Jungle Orchid for a Lovestruck Bee 🌐 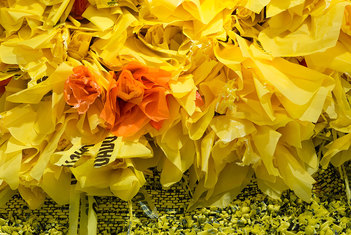 Gallo describes the weaving process as both repetitive and deeply meditative: a sort of physical mantra. She characterizes her approach to such work as “quasihypnotic.”

Born in Rome to a Puerto Rican mother and an Italian father, Gallo subsequently spent her formative years living in the Bronx, where she continues to reside and maintains her studio. Despite their genesis in humble, disposable materials, Gallo’s totemic sculptures entail soaring, flourishing gestures reminiscent of the classical art and architectural influences to which she was broadly exposed as a child. The works also yield a sense of meditative contemplation and a yearning toward transcendence that reflect the artist’s early, prolonged exposure to pre-modern Italian art.

By contrast, the materials that Gallo employs serve as fragmentary physical embodiments of her external environment in the Bronx – a locale to which she feels profoundly connected. Elements such as the caution tape used to cordon off degenerated buildings or crime scenes evoke the troubled history of the area, while other materials such as the tarps of blue plastic that are ubiquitous among construction sites in the area allude to its ongoing social and physical transformation. By closely integrating materials from the physical and social settings of her life with self-referential thematic concerns, Gallo’s work serves to collapse distinctions between personal memory and identity and external physical and social settings – thereby reframing her work as a distinctive integration of individual and communal elements.

She considers a sense of temporal disruption as a fundamental element of both her process and the resulting object. While weaving, she often subjectively experiences a sense of time slowing. The physical act of hand-weaving entails an anachronistic approach to process that strives toward the archetypal. The use of mass-produced and highly-disposable materials binds the work to a contemporary timeframe, even while her methods serve to strain and attenuate these connections. The resulting works, with their tension between the ephemeral and the superannuated, yield a similarly asynchronous state for the viewer.

Although the vast majority of Gallo’s labor is painstakingly wrought by her own hand, at other points she abruptly modulates her production methods towards the collective by utilizing students or community members to participate in the aggregation of discrete elements into large-scale or installation works. Gallo consciously considers her process at such points as shifting to a inclusive endeavor with “social connotations,” whereby the production is transformed into a “visual metaphor for community.”