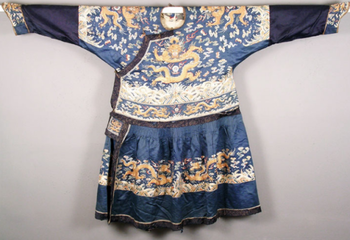 Ceremonies and Celebrations explores interesting ideas that connect these vast regions together. The exhibition is divided into four thematic sections: the first focuses on the connection between gender and textile production and the way that textiles are used to identify gender roles in society. The second idea that is explored in the exhibition is the role of textiles as a signifier of one’s status. The third theme illustrates the unique relationship between textiles and religions across Asia. The final section looks at textiles worn or used in marking ceremonies and life transitions, including birth, weddings, and death.

Some of the highlights of the exhibition will be the imperial dragon robes worn by China’s emperors and imperial family during the Qing dynasty (1644-1911). These robes feature nine powerful dragons, the symbol of the Emperor, embroidered or woven across the front and back of the silk robes. The yellow robes were the rarest of all, since the colour yellow, symbolising the sun, was worn exclusively by the Emperor. One such yellow robe, worn by the Guangxu Emperor (1875-1908) as a boy, will be on display in the galleries.