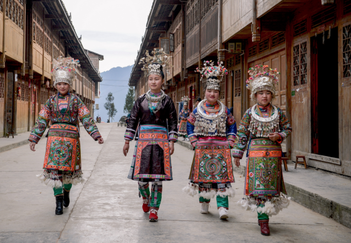 Several ethnic minorities live in the mountainous southwest region of China, in the province of Guizhou. The Miao are one of the largest groups (9 million people) and live throughout this area along with other minority groups like the Dong (3 million). Over the centuries the Miao migrated throughout the southern part of China and in all of the different villages where they settled they developed their own form of dress. There are some 175 to 200 different kinds of traditional Miao costumes! The groups are often named on the basis of their clothing. For example, there are the Long-horn Miao, the Long-skirt Miao, the Red-embroidery Miao and the Tin- embroidery Miao. While the Miao usually live in the mountains, the Dong can be found near the rivers. They are renowned for their beautiful wooden bridges and towers.

Among the Miao and the Dong there is always a reason to celebrate something – a wedding, the birth of a child, a finished house – and they wear their traditional clothing on these occasions. The women are prolific in their artisanal crafts, such as weaving, painting with indigo dyes, batik techniques and embroidery (this is what they are most famous for). Headdress, collars, jackets, skirts, aprons and baby carriers, everything is extravagantly embroidered. The festive garb is then lavished with ornate silver hairpins and necklaces.