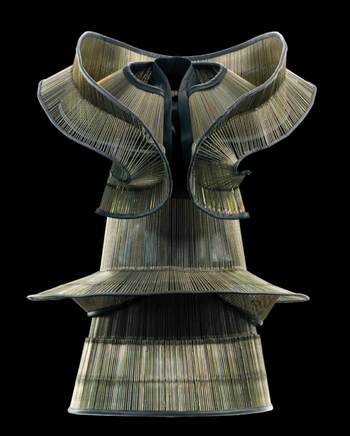 Cutting-edge designs by van Herpen have been worn by style icons such as Lady Gaga, Beyoncé, and Bjork and have electrified the runways of Amsterdam, London, and Paris. She has gained international acclaim for her combination of traditional craftsmanship and futuristic, innovative techniques—including some of the world’s first examples of 3-D-printed fashion. Her visually impressive, sculptural designs often feature unusual materials such as umbrella ribs and synthetic boat rigging.

Speaking of her artistic philosophy, van Herpen says, “For me fashion is an expression of art that is very closely related to me and to my body. I see it as my expression of identity combined with desire, moods, and cultural setting. Wearing clothing creates an exciting and imperative form of self-expression. ‘Form follows function’ is not a slogan with which I concur. On the contrary, I find that forms complement and change the body and thus the emotion.”